Vinegar is a highly acidic substance that arises naturally from the fermentation of alcohol. Aside from its flavorful versatility, recent medical studies have made at least a few indications that vinegar has some impressive health benefits. Why they might exist isn’t yet very clear – some suspect that certain phytochemicals, or molecules that are found in certain plants, are the root cause. You might be surprised to learn that there are dozens of types of vinegar. The most common vinegars found in American kitchens are white distilled and apple cider, but the more adventurous may also use red wine vinegar; white wine vinegar; rice vinegar; or gourmet varieties, such as 25-year-old balsamic vinegar or rich black fig vinegar.

Vinegar can be made from just about any food that contains natural sugars. Yeast ferments these sugars into alcohol, and certain types of bacteria convert that alcohol a second time into vinegar. A weak acetic acid remains after this second fermentation; the acid has flavors reminiscent of the original fermented food, such as apples or grapes. Acetic acid is what gives vinegar its distinct tart taste.

The claims are many and some of the most impressive are listed below:

1.) Vinegar helps the body absorb calcium: Vinegar’s calcium absorption assistance is especially useful for people who are lactose intolerant. Their aversion to dairy limits the number of calcium containing foods available to them. But by eating calcium dense leafy greens with a little vinegar, one can work towards offsetting that deficiency. Those at risk for bone loss and Osteoporosis, especially middle-aged and older women, may stand to gain some very real health effects from vinegar consumption. As mentioned in the article’s introduction, vinegar is highly acidic. Its primary component is a substance called acetic acid, which has a very low pH – much like the body’s own naturally occurring digestive juices. According to some in the medical community, vinegar can thus assist the digestive system in breaking down certain other substances by incorporating a little more acidity into the digestive mix. Listed among these substances is calcium. While calcium supplements are widely available to those at risk of Osteoporosis, it’s the amount of the mineral absorbed that makes the difference between a healthy and unhealthy bone structure. By consuming vinegar before calcium, one may be able to increase the ratio of absorbed and used calcium to calcium taken in.

2.) Vinegar helps people with type 2 diabetes: It appears to increase insulin sensitivity in those who are insulin resistant. In a 2007 medical study 11 patients were directed to consume two tablespoons of apple cider vinegar diluted with water right before bed. When they woke up, their blood sugar levels were, on average, between four and six percent lower than control subjects who did not consume the vinegar. Though the study was small enough to be considered only preliminary, it did seem to show that vinegar may be an effective tool in managing blood sugar levels for Diabetes patients. Other earlier studies also support this hypothesis. In a 2004 medical study conducted by the American Diabetes Association, it was found that those who consumed apple cider vinegar before a meal heavy in carbohydrates had lower blood sugar levels than those who didn’t.

3.) Vinegar helps with weight control: Many cultures have used vinegar as a weight loss aid. Many observational studies as well have linked vinegar with healthier overall weight. White vinegar (and perhaps other types) might help people feel full faster than those who don’t consume it. So; in turn you eat fewer calories and smaller meals. 1/2 a cup of vinegar has only 25 calories. Vinegar can be used to replace high-fat foods like mayonnaise and tartar sauce. And help you control what you eat. Remember to consume in moderation too much of anything is not good for you.

4.) Vinegar helps with pesticides: Some people are concerned that eating large amounts of fruits and vegetables may lead to an unhealthy consumption of pesticide and other farm-chemical residues. Vinegar can lend a hand here, too. Washing produce in a mixture of water and vinegar appears to help remove certain pesticides, according to the small amount of research that has been published. Vinegar also appears to be helpful in getting rid of harmful bacteria on fruits and vegetables. To help remove potentially harmful residues, mix a solution of 10 percent vinegar to 90 percent water (for example, mix one cup of white vinegar in nine cups of water). Then, place produce in the vinegar solution, let it soak briefly, and then swish it around in the solution. Finally, rinse the produce thoroughly.

Do not use this process on tender, fragile fruits, such as berries, that might be damaged in the process or soak up too much vinegar through their porous skins. Some pesticide residues are trapped beneath the waxy coatings that are applied to certain vegetables to help them retain moisture. The vinegar solution probably won’t wash those pesticides away, so peeling lightly may be the next best option.

So here it is. You can use vinegar in many ways. I like to dress my salads with it at times, other times you can was your windows, vegetables and fruits and some have even used it to remove dandruff. Use your discretion and always do some research or discuss with your health provider before using it in a medical manner. 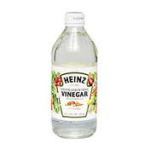